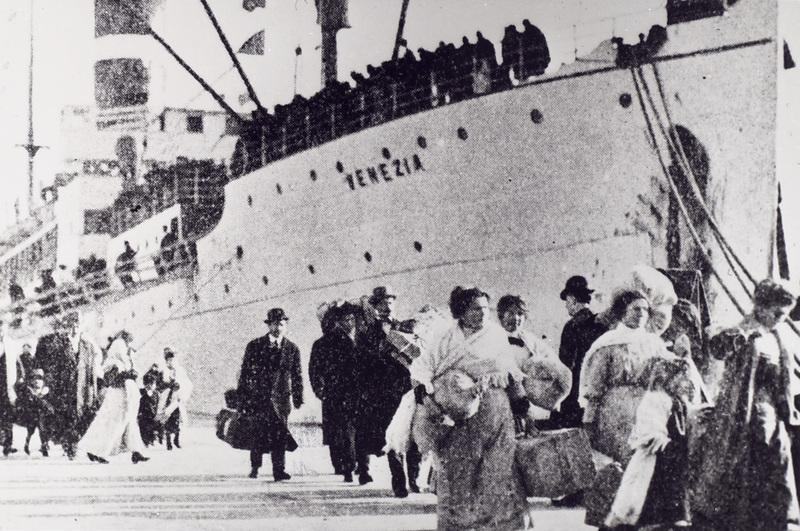 Passengers on the Venezia land at State Pier One, 1913

This distin­ct rise of the Italian American in Providence, is marked by a shift of immigration from the “old” northwestern to southwestern European immigration. For Rhode Island, immigrants were mainly Portuguese and Italian, and immigration patterns themselves were changed by the Chinese Exclusion and Passenger Acts of 1882.2 These acts restricted certain country's allowed immigration to the United States.

Although there had been a minute grouping of Italian people in Rhode Island in the 1870s, the vastly increased immigration in the 1880s would shift the Italian presence in Rhode Island to extreme prominence and slow recognitions.

The Fabre Line, a French transport business, had been favorable to the development of Providence and its harbors due to its usefulness as both a cargo and immigrant transport vehicle. Instrumental in retaining their business was an overcongestion of immigrant departure at New York and the securing of $500,000 funds for renovating the Providence harbor. Mario Vervena, the Italian Consul in Providence, pressured and rallied alongside these requests because of the ethnic makeup of the incoming immigrants.3 Due to engagement into the Port of Providence from 1909-1913 and the reframing of it as an immigration port, Italians began emigrating directly to the capitol.

On May 21st 1914 State Pier No. 1 would finish development. Preceded by and during its immigration years, it was dominated by ships from the French-owned Fabre Line utilizing the Providence harbor. In 1911 ten Fabre ships travelled inbound and seven outbound. The Venezia, pictured left, was the first ship to visit a currently unfinished State Pier No. 1 on December 17, 1913. The ship was greeted by developing Italian community figures such as members of the Providence dioceses and Italian Catholic churches of Providence.4 It would be one of the original three ships making trips to Italy for immigrant transport.

Most of these immigrants and their succeeding generations were southern Italians from smaller villages or rural farming areas. Where northern Italy stabilized and unified under King Victor Emmanuel III, the southern provinces had faced several issues under tyrants and other governmental mismanagement.5 These southern Italian migrants would make up an overwhelming majority of Rhode Island’s Italian American immigrants.

I didn't know my father until I came to the United States. My father met us at Staten Island...I didn't know who he was. And I said to my mother 'Who's that man?' My mother came with five children all by herself. She put all her papers in a dishtowel hung on her arm so she wouldn’t lose any of them.

...my father had to come down to verify that I was his daughter. He was in the next room with an interpreter...and the man said to my father “How do you know she is your daughter?”...I got scared. My father got very angry at the man. He said...“Of course she's my daughter, my wife was five months pregnant when I came out here!”

This wave was mostly men, sometimes families and almost never a lone woman or child. After leaving their families behind in Italy, these men would send back money in support. The goals for many were to ultimately return to the motherland to their families after enjoying the wealth they could accrue for their families. If their families were sent over in succession, it could mean a first meeting of a father, or other family that had settled during the early years of the first wave, setting divisions between traditional family and familiarity.

The Fabre Line would partially operate over time to Providence through these years but ultimately be substantially diminished due to the beginning of World War I in 1914. 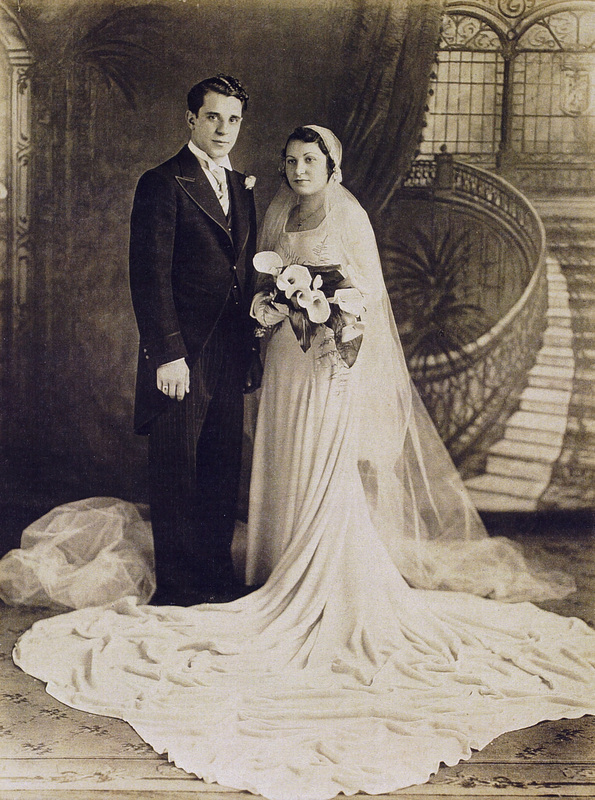 During World War I the Fabre Line ran a meager amount trips to and from Providence in 1914-1919. The Fabre Line not only commissioned their ships to run as governmental supply ships of the allied powers, but also risked their still running ships to become under fire, particularly due to the areas of the Mediterranean they were servicing.6

The line resumed immediately after the war ended in 1919, and in the period between 1921 and 1924, when the line resumed, the largest influx of immigrants to Providence occurred and their largest passengers continued to be Portuguese from the Azores and southern Italians.7 The shift of immigrant character changed in the 1920s from those of the first wave.

These were older men, less concerned with temporary settlement and looking forward to their settling in founded ethnic neighborhoods. In fact, Italians settled in larger numbers than the Portuguese, their final destination of Providence enhanced by the existence of communities that for 40 years had developed in Rhode Island. Families were more common to come to the Americas now, and join their relatives. From 1898 to 1932, 54,973 Italians would use the Fabre Line to enter Providence.8 At the same time, 13 thousand Italians would return to Italy from 1908-1932, having entered without the intention to do more than find work.

1921 brought the first of two federal acts that would change immigration logistics. Antiethnic ideologies permeated through Anglo settlers in powers on the overpopulation of the southeastern Europeans of darker complexions and strange unAmerican cultures. The Emergency Quota Act of 1921 was first implemented to utilize the 1910 census to limit the immigration of the newcoming and early 20th Century developed patterns.9 Where this caused a significant drop, in 1924 this number was slashed further by the Reed-Johnson/National Origins Quota Act, which used the 1890 census. This barred immigrant-allowance into the United States to only 2% their foreign-born presence at the time.10

Being that most new immigration took place following 1880, this damaged much of the possibility of seeking American destination and the Fabre Line once again depressed in visitation. Rhode Island also specifically put into order the Patriot Acts in 1919, built as forced assimilation schools for immigrants who were able to migrate. These came with truancy and deportation threats, further complicating an experience of transition.11

The Fabre Line would change its travels as well to this – diverting focus towards the deeper Mediterranean and Slavic, Lebanese, Armenian, Greek and Jewish migrants. Italian immigration would never reach its levels of previous waves and simmered to a trickle for direct transportation to Providence, truncated by the end of the 1920s.

On February 25, 1931 State Pier No. 1 would suffer a massive fire incurring $750,000 in damages and be ultimately discontinued for Fabre Line usage. In this year as well, the Italian government took monopoly on its immigrant transportation and killed business of the Fabre Line there.12 The Fabre Line would use the west harbors during this three year period, dedicating transportation to Cape Verdeans starting in 1931. By 1934 there ceased to be reason to return to Providence and on July 4th the last Fabre Line ship – the Sinaia would make its last departure from the harbor.13 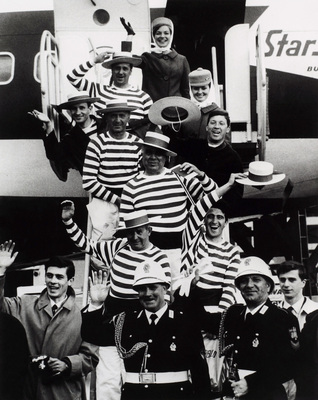 Italy signed the peace before the Germans. A lot of Italian girls and boys were taken prisoner. In concentration camps. I saw all this. Remember nightmares after the war was over.

One day I was shopping with an aunt of mine for food and I was caught between the fascists and the patriots...before the end of the war. The famous [four] days in Naples. This was when Naples arose against the fascist government. We were waiting for the Americans. Inside the houses. The Germans would take the men so my father and brother could not go for food. My mother just had a baby. I was caught in a battle. I saw machine guns. I remember a pregnant woman dead in the street.

I got home finally, I don't know how...We ran. We escaped. I was in a state of shock. I told my father while I was crying that if I saw another war I would kill myself.

Succeeding Italian immigration to Providence is not characterized by waves, and instead by small movement. Italian communities developed by generational stay more than incoming ethnically familiar immigrants.

Anti-Italian attitudes in the early 20th Century were under the guise of opposition to ethnic purities of whiteness, and the Klu Klux Klan organized among these in Rhode Island – ousted in its most visible infamous history of the rally held in Foster in 1921.14 Rhode Island Italians would fight against the Klan but be deemed an opposition of American values.15

Dedications of Italian pride to the motherland of Italy were typical in their treatment of highly culturally concentrated areas. What is now DePasquale Avenue was once named Balbo after a general of Mussolini’s highest provisions.16 Where praising fascism was not the intent of all Italians, the 1930s and the aftermath of United States involvement against Italy in World War II developed different un-American views of them. Escaping these fascisms for the Italians in Italy was more pertinent than celebrating the country’s involvement in war, emphasized by Rosa Calendrelli’s anecdote above.17