Joseph Peace Hazard also claimed that ghosts and spirits had contacted him personally.  In his letters, Hazard describes seeing, hearing, or sensing the spirits of friends and celebrities. 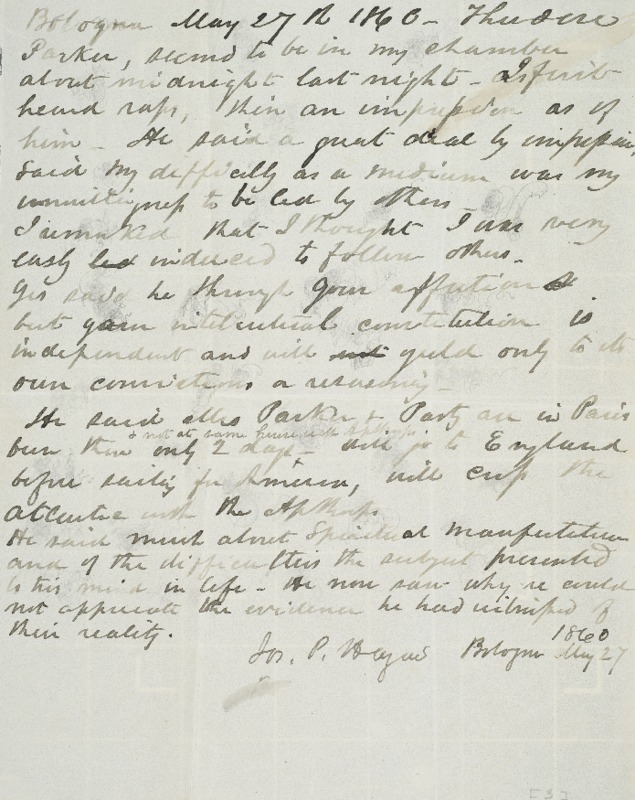 Assurance from a Departed Friend

In a note written during a visit to Bologna in 1860, Hazard describes a visit from the spirit of the recently deceased Theodore Parker, a Transcendalist minister:

"Theodore Parker, seemed to be in my chamber about midnight last night - distinct heard raps, then an impression as of him. He said a great deal by impression, said my difficulty as a medium was my unwillingness to be led by others. I remarked that I thought I was very easily induced to follow others. Yes said he through your affection but your intellectual constitution is independent and will yield only to its own conviction, or reasoning.

"He said much about Spiritual manifestations and of the difficulties the subject presented to his mind in life - he now saw, why we could not appreciate the evidence he had witnessed of their reality." 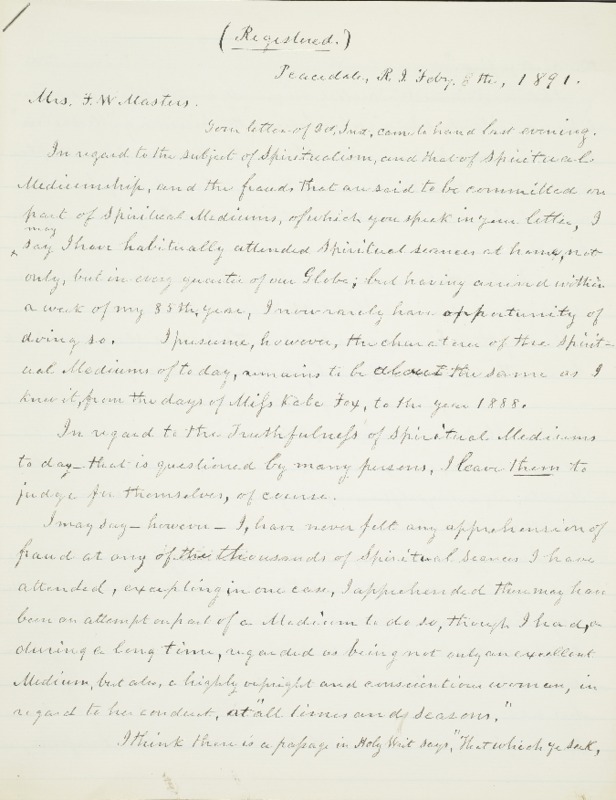 "There is another Life"

In this letter, Hazard describes an encounter with the "Materialized Spirit" of a skeptical friend, the night before he received the news of his friend's death:

"Another friend of mine, who was one of the most pure and guileless of men, was also, not only an unbeliever in the idea of there being a future life, but felt entirely sure that such was the case.

"At that time I frequently visited the city in which he lived and generally remained there several weeks, and sometimes, months. On these occasions, I usually passed an evening at his home at least once per week and sometimes, more, and the question concerning the belief of a Future life was sure to be one of the subjects of our conversation.

"During an evening walk I was taking in a rural district, and about the hour of midnight, I saw a person who [was] walking toward me, and rapidly, I stopped walking. Almost immediately upon doing so, a person passed near by me and very rapidly, and at same time I heard a strong and clear voice distinctly say, 'There is another Life.'

"On the following morning, having finished my usual late breakfast, I then commenced reading the contents of the Mail that arrived in the Morning.  The first letter I opened announced the death of my skeptical friend above mentioned." 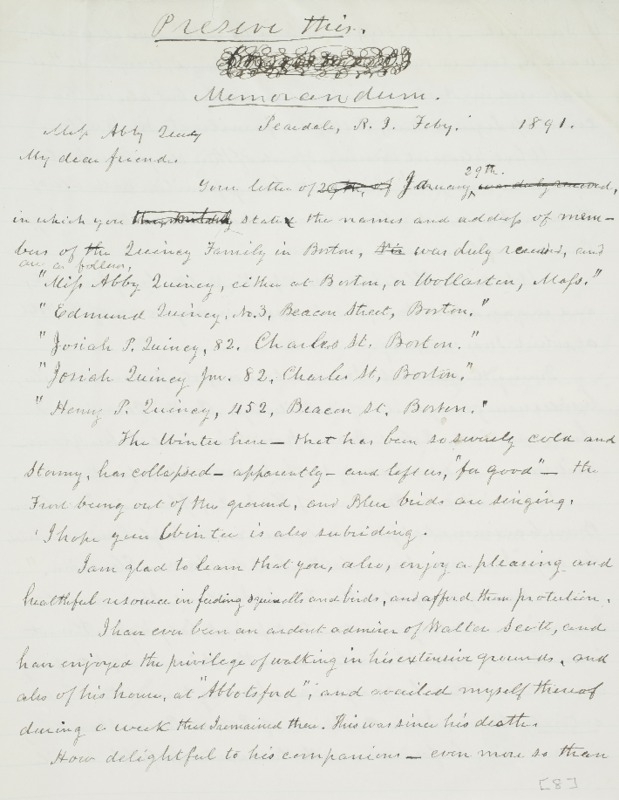 The Spirit of Robert Burns

In this letter, Hazard describes a visit to Scotland, which included a private seance with the servant of Sir Walter Scott, as well as the appearance of the spirit of Robert Burns during a visit to London:

"Almost immediately after I had retired - on the third night of my occupation of these lodgings - and having turned the Gas entirely down, I saw the Spirit of Robert Burns standing in mid air, before me, with the sweetest possible smile beaming upon me.

"At that time, I had an engraving of Poet Robert Burns during many years past.  This engraving presents him in the usual 'Scotch Bonnet.'  In this case - however - his Spirit wore a stiff, hard, black Broad brimmed Woollen Hat.  I was unable to account for this, but it did not, in the least degree produce in my mind concerning his identity.

"Two days thereafter, Doctor John A. Ashburner, of Hyde Park, London, who was said to be the most distinguished and able Physician in the City of London, and whom I had then never heard of, called at lodgings and having passed about a half an hour with me, asked me to dine with him on the day following, and I did so.

"During this dinner, I gave Doctor Ashburner an account of my having seen Poet Burns in my Chamber, and at same time, I described the strange hat Burns wore on that occasion.

"In response to this, Doctor Ashburner informed me he had seen a Portrait of Poet Burns, in which he is presented in the same hat that I had described, and which I had seen him in my chamber in London.

"A few days thereafter, Doctor Ashburner again invited me to dine with him.  I accepted this, of course.  On this occasion, Doctor Ashburner having found the Portrait of Burns above mentioned, he handed it to me, and I recognized the strange Hat I had seen upon the head of the Spirit of Robert Burns, as being exactly like the one he wore at the time I lately saw him in my chamber, at my 'Lodgings' in London.

"I had then, as now, felt fully assured that the Spirit of Robert Burns presented itself - himself - in my Chamber, with the strange hat (to me) he wore on that occasion, for reason that he knew that at that time, I had not seen this portrait of Burns, and therefore I would probably feel more thoroughly assured that it was really himself I had seen at my Lodgings in London, than might be the case, if he had presented himself to me in a Portrait of himself, with which I was familiar."

Hazard may have been referring to a copy of Peter Taylor's portrait of Robert Burns, which is now owned by the National Galleries of Scotland. 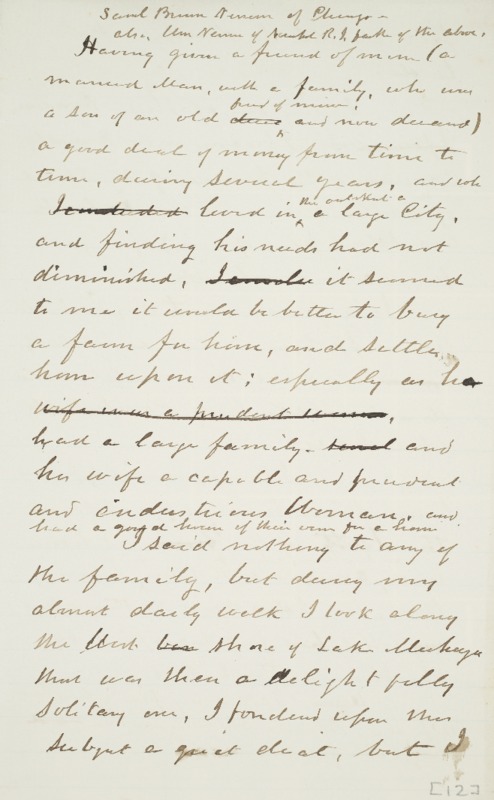 Notes on Vernon spirit, no date

Shaking Hands with a Spirit

In this note, Hazard describes an encounter with the spirit of a friend's deceased father.  Hazard was considering helping a struggling friend by helping move his family to a farm:

"I became most vividly conscious of the presence of the Spirit of his Father (who was a most beloved friend of mine) of my friend.  In a few moments my invisible friend spoke in as clear and distinctly spoken words as any mortal could do - Make him comfortable where he is.

"A few evenings after the above, I attended a private seance, at which the father of my Chicaco friend came.  I presented my hand to him but instead of 'shaking' it, he seized me by my coal collar, and while giving me a good shaking, said, 'I understand you, you rogue.'

"This friend of mine, habitually to his especial friends, thus shook hands." 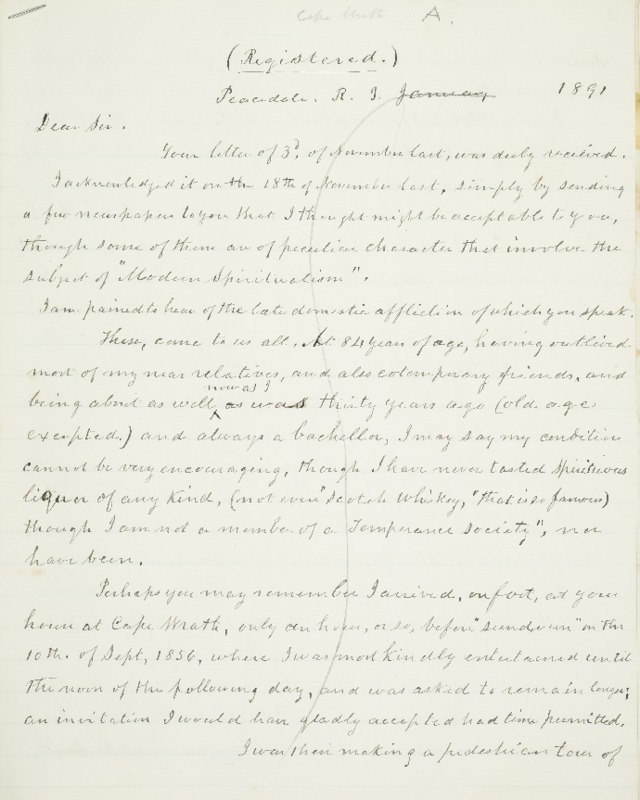 In this letter, Hazard describes how spiritual intervention saved him from a potentially dangerous encounter with a bull during a tour of Scotland:

"I had been seated on the top of this stone wall only a few moments, when it suddenly occurred to me there might be a dangerous Bull in the Lot I was abou tto cross, although a moments reflection assured me that such apprehension my part convinced me that this idea was absolutely absurd; that it must one of the last of fields in which a Bull would be kept, there not being a Farmstead, or even a dwelling house within a mile or two of this Light house.

"Nevertheless, I descended from the wall and walked to the dwelling house by way of the outside of the wall that makes the Southern boundary the lot of several acres of land upon which the Light house stands, and also dwelling in which the keeper of the Lighthouse lived, and also of several other persons who are requisite to this isolated household.

"This apprehension on my part, that then seemed to me so absurdly absurd, was in no degree, whatever, dissipated, until I happened to mention the subject to the family at Cape Wrath, soon after we had taken our evening meal, at same time apprehending I might render myself somewhat ridiculous, upon doing so.

"I had proceeded with my narration as far as my having gotten upon the top of the wall, and mentioned my apprehension of a Bull, when one of the family exclaimed, 'There is a dangerous Bull there, did he run at you?'

"That I escaped death by this Bull through intervention of the spirit of a deceased person, and probably that of a deceased friend of mine, I entertain no doubt, whatever." 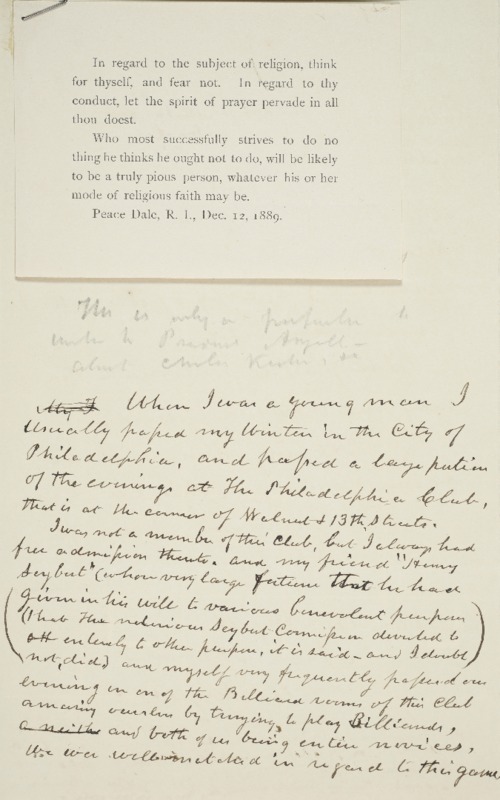 In this letter, Hazard describes spiritual intervention during a game of billiards with Henry Seybert:

"Having passed some five or six evenings amusing ourselves at this game, and my turn to make a shot having come, and the ball with which I played, being within about an inch of the other one I going to play at, I held my cue in a vertical position, and remarking (in a spirit of laughter at myself, of course) Now, "I am going to make Eleven, at this shot."  I struck my ball as hard as I could.

"Sure enough, up jumpt' my ball, and hitting the top of the Ball I aimed at, my ball pursued its way about the table and hitting other balls and "pocketing" some of them, I did count Eleven.

"This shot caused a great Sensation, and on the day many persons called to see either my friend Seybert or myself and ask if the report thereof, was true.  My friend Hartman Kuhn (who was considered as being best player of Billiards in the City of Philadelphia) and numerous perons called to see either Mr Seybert or myself to ask if these report was correct.  Mr. Kuhn immediately make enquiries in regard to this shot of Eleven, of all persons whom he knows who were interested in Billiards, and could find no one who had made Eleven at one Shot, in the City of Philadelphia or at other points, and with the same result as above mentioned."

"And such is the fact, in my estimation, I fully believe I not only did not make this shot, but I also believe it was made by the departed Spirit of a human being, whomever the departed spirit may have been."