Hazard was a friend and patron to many mediums, and claimed to have participated in thousands of seances. 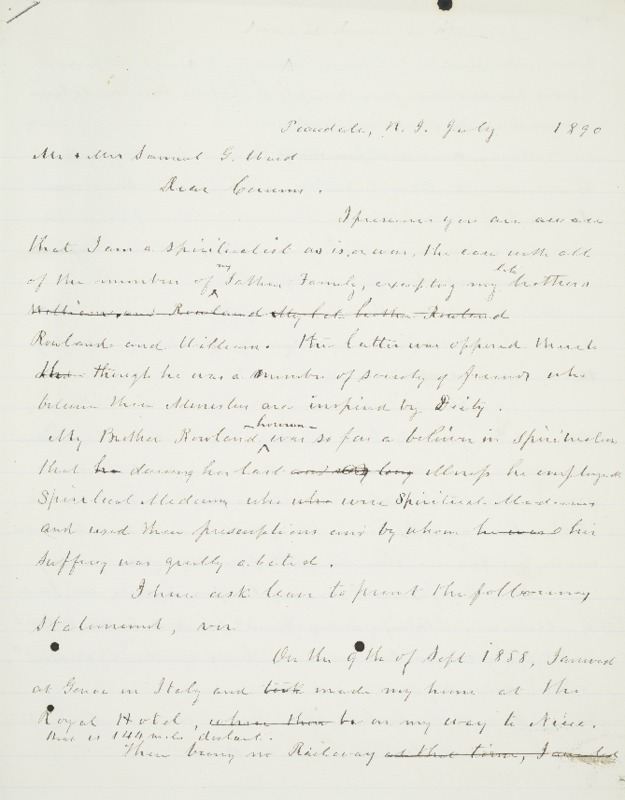 Spiritualism in the Hazard Family

In a letter to his cousins, Hazard describes his family's interest in Spiritualism, as well as his brother's patronage of a "healing medium" in the final years of his life:

"I presume you are aware that I am a Spiritualist as is, or was, the case with all of the members of Father's Family, excepting my late brothers Rowland and William.  The latter was opposed thereto though he was a member of society of friends who believe these Ministers are inspired by Deity.

"My Brother Rowland - however - was so far a believer in Spiritualism that during his last illness he employed Spiritual Mediums who were Spiritual Mediums and used their prescriptions and by whom his suffering was greatly abated." 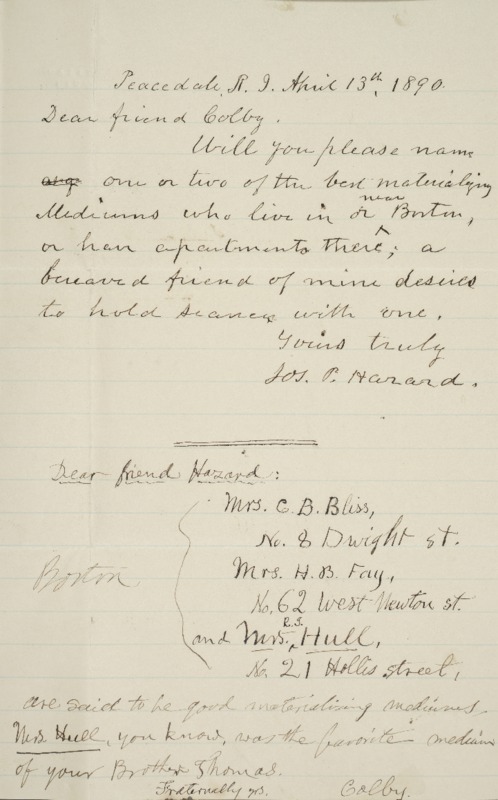 In this brief letter, Hazard asks Luther Colby to recommend "materializing mediums" to help a "bereaved friend."  Colby responds with the names and addresses of local materializing mediums, including one who was a favorite of Hazard's brother, Thomas:

"Will you please name one or two of the best materializing Mediums who live in or near Boston, or have apartments there; a bereaved friend of mine desires to hold seances with one. 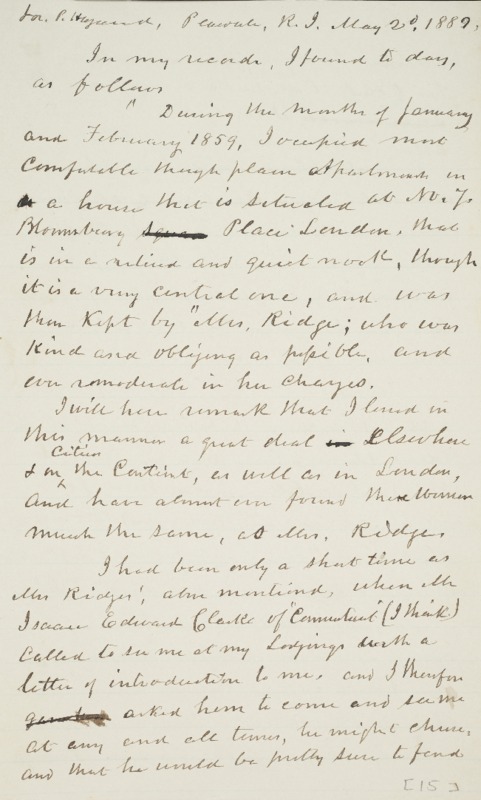 In this note, Hazard recalls a spiritual sitting he conducted with a friend, Edward Clark, in London.  Clark was ill, and they consulted the spirits for advice on treatment:

"I soon mentioned the subject of Spiritualism to Mr. Clark, and he soon became interested in the subject; and soon thereafter, he accepted my proposal to hold a spiritual sitting.  Accepting this, we seated ourselves at a table (near the coal fire, that was in my room, night and day) and in a minute or two, the table began to move, and before the close of the evening, it would not only rock but most vigorously; and on the following evening, this Table would frequently run all about the room.

"Having continued these sitting, a week or two, it occurred to me to ask the Spirits, if they could not advise Mr. Clark of some remedy that might alleviate his care.

"At this suggestion, the Table commenced running about the Room in the most Frantic manner.  This subsiding, I asked what we should do, and received for reply in writing, a prescription, that was so badly written that neither of us could imagine what it was; until I happened to remember that when I was a boy, a Physician advised me to take a few drops of 'Black Cohosh' - this by writing through Mr. Clark's hand.

"At this, the Table immediately became Frantic again, for some time." 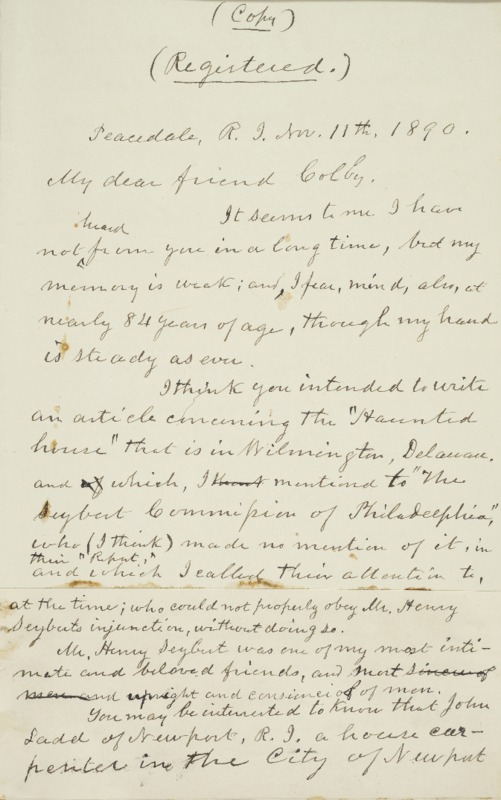 The Business of Mediumship

In this letter, Hazard discusses a haunted house in Wilmington, Delaware, which he recommended for investigation by the Seybert Commission.  Henry Seybert, one of Hazard's "most intimate and beloved of friends", designated money in his will to fund the creation of a comission to investigate Spiritual phenomena.  However, the Commission published a report in 1887 which did not find any hard evidence to support Spiritualist beliefs.

Hazard also shares the details of one Spiritual Medium's fees:

According to the Bureau of Labor Statistics (2018), John Ladd's fee would be equivalent to approximately $50,000 today. 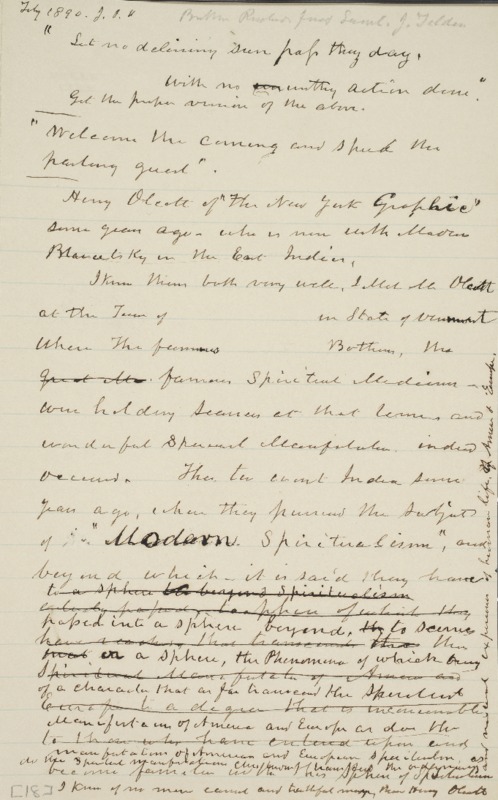 In this note, Hazard describes famous mediums Henry Olcott and Madam Blavatsky, and describes other mediums who have "passed into a sphere beyond" by traveling to India:

"Henry Olcott of 'The New York Graphic' some years ago, who is now with Madam Blavatsky in the East Indies,

"I know them both very well.  I met Mr. Olcott at the Town of [blank] in State of Vermont where the famous [blank] Brothers, the famous Spiritual Mediums were holding seances at that time, and wonderful Spiritual Manifestations indeed occurred.  These too went to India some years ago, where they pursued the subject of 'Modern Spiritualism' and beyond which - it is said they have passed into a sphere beyond, the Phenemena of a character that far transcend the Spiritualist Manifestations of America and Europe" 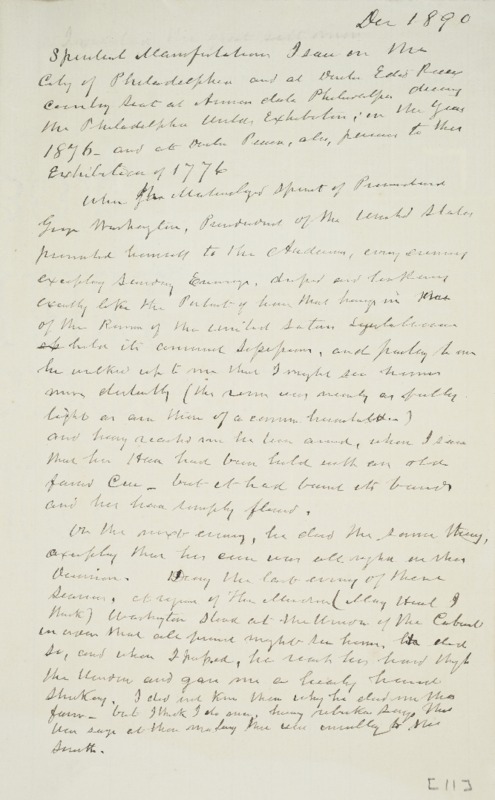 In this note, Hazard describes the spirit of George Washington who appeared at a series of public seances during the Philadelphia World Exhibition in 1876:

"The Materialized Spirit of President George Washington, President of the United States presented himself to the Audience, every evening excepting Sunday Evenings, dressed and looking exactly like the Portrait of him."

"He walked up to me that I might see him more distinctly (the room was nearly as fully light as are those of a common household) and having reached me he turn around, when I saw that his Hair had been held with an old fashioned Cue - but it had burst its band, and his hair simply flowed.

"On the next evening, he did the same thing excepting that his cue was all right on this Occasion.  During the last evening of these seances, at request of The Medium (May Hunt I think) Washington stood at the Window of the Cabinet in order that all present might see him, he did so, and when I passed, he reach his hand through the Window and gave me a hearty hand shaking.  I did not know then why he did me this favor."